After NYU, Liz wrote for the third and final season of the acclaimed comic webseries ​SUBMISSIONS ONLY, which NY Magazine called "the best (funniest, smartest, warmest) series ever made about show folk" and Entertainment Weekly called "the best show not on TV."

Liz currently writes for the Matt Groening Netflix series Disenchantment. She has worked for Aaron Sorkin on HBO's The Newsroom, Jason Katims on NBC's Parenthood, Disney, Hulu, DreamWorks and has developed original pilot scripts for network and cable TV.

Liz holds an M.F.A. from NYU Tisch's GMTWP, an M.A./B.A. in Journalism from Baylor University and is a proud member of ASCAP. She is represented by CAA and by Thruline Entertainment.

​​​Next, Liz went to NYU's Graduate Musical Theatre Writing Program to pursue an M.F.A. in musical writing. While there, she wrote REAL HARD MATH (music by Josh Jung), which was based on her time as a high school teacher and has played at Barrington Stage, Trinity Rep and also aired on the PBS series, Musicals in the Making.

She also wrote ONE GOOD DAY (music by Rona Siddiqui), a romantic musical comedy, which went on to win the ASCAP Mary Rodgers/Lorenz Hart Award, was named a best new musical by the Festival of New American Musicals, debuted at the DreamWorks/ ASCAP Musical Theatre Workshop in LA with Stephen Schwartz and Aria Entertainment's Page to Stage Showcase in London -- and can be seen next in NYC at the NAMT Festival and at the ĭmáGen Workshop at MSU this fall 2018.

Liz wrote a number of short musicals and cabaret songs with wonderful friends and composers like Max Mamon, Joey Contreras, Sarah Hirsch, Josh Freilich, Nikko Benson, Danny Abosch and more. Check out some of the favorites here, from fun concerts like the Broadway's Future Songbook Series at Lincoln Center, Brian Stokes Mitchell's debut at the Cafe Carlyle, and William Finn's The Best of Ridiculously Talented Composers and Lyricists You Probably Don't Know But Should at Barrington and 54 Below. 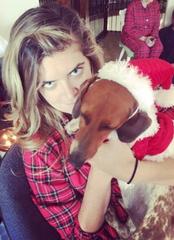 ONE GOOD DAY COMING TO THE IMAGEN WORKSHOP 2018

Liz writes high-concept half hour TV comedies, eccentric TV dramedies, feature animation and all kinds of musicals. Click on Projects and Watch + Listen to check out the musical work.

Liz got her start writing columns for the Dallas Morning News. She thought, a career in journalism will lead to writing movies like Nora Ephron! But after covering a cafeteria milk scandal and writing articles on the caucus without a super clear understanding of what a caucus was, she thought, journalism might not be the most direct...